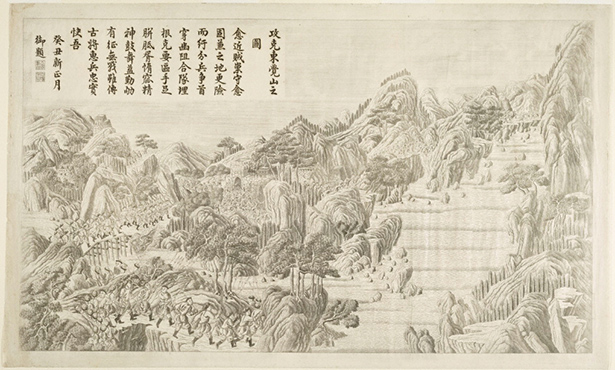 LOS ANGELES—The Getty Research Institute (GRI) has acquired an extraordinarily rare suite of battle prints from about 1793 that depict the Chinese Emperor Qianlong’s (reign era, 1736–1795) successful military campaign against invading armies from Nepal. These eight large-format copper engravings represent the complete set of prints commissioned by the Emperor to commemorate his 1792 victory. Printed in China, this set is one of seven so-called "Conquest" suites.

"The rarity of these prints makes them an extraordinary addition to the GRI’s stellar collections depicting ’China on Paper,’ highlighting cross-cultural relationships between Europeans and Chinese," said Marcia Reed, Chief Curator at the Getty Research Institute. "Because the GRI holds strong collections of related works, it’s extremely beneficial to bring the collections already in place and these prints together for future research and publication."

The scenes show dynamic landscapes of undulating mountains which seem to envelope the troops marching and fighting amidst their peaks and valleys. One plate depicts the victorious emperor being carried towards a yurt in front of a grand hall. The defeated soldiers of the enemy are grouped on the left, all on their knees. Each print includes a poem at the top of the engraved print; the poems were based on the Emperor’s own personal commentary on the scenes.

Prints such as these made their way into China from Europe in the 1700s and the emperor would have been given gifts of panoramic battle prints by visiting European dignitaries. In 1765 he ordered drawings to be made from monumental paintings commemorating his recent victories. These drawings, made by Jesuits employed by Qianlong’s court, were sent to Paris for engraving and printing. Created by Europeans for a Chinese audience, the prints were very European in appearance, with Chinese visual tropes incorporated in the drawings. When the prints were received at court, poetry was added to them—a very Chinese touch.

The Pictures of the Campaigns against the Gurkhas break away from this hybrid imagery. Though inspired by a European tradition and using French printing techniques, the drawings are notably Chinese in composition and style.

As part of the GRI’s special collection, these prints will now be available for scholarly research. The GRI’s vaults hold rare and unique collections in art history and visual culture from around the world, including more than 27,000 prints ranging from the Renaissance to the present.

The J. Paul Getty Trust is an international cultural and philanthropic institution devoted to the visual arts that includes the J. Paul Getty Museum, the Getty Research Institute, the Getty Conservation Institute, and the Getty Foundation. The J. Paul Getty Trust and Getty programs serve a varied audience from two locations:  the Getty Center in Los Angeles and the Getty Villa in Malibu. The Getty Research Institute is an operating program of the J. Paul Getty Trust. It serves education in the broadest sense by increasing knowledge and understanding about art and its history through advanced research. The Research Institute provides intellectual leadership through its research, exhibition, and publication programs and provides service to a wide range of scholars worldwide through residencies, fellowships, online resources, and a Research Library. The Research Library—housed in the 201,000-square-foot Research Institute building designed by Richard Meier—is one of the largest art and architecture libraries in the world. The general library collections (secondary sources) include almost 900,000 volumes of books, periodicals, and auction catalogues encompassing the history of Western art and related fields in the humanities. The Research Library’s special collections include rare books, artists’ journals, sketchbooks, architectural drawings and models, photographs, and archival materials. Additional information is available at www.getty.edu. Sign up for e-Getty at www.getty.edu/subscribe to receive free monthly highlights of events at the Getty Center and the Getty Villa via e-mail, or visit www.getty.edu for a complete calendar of public programs.